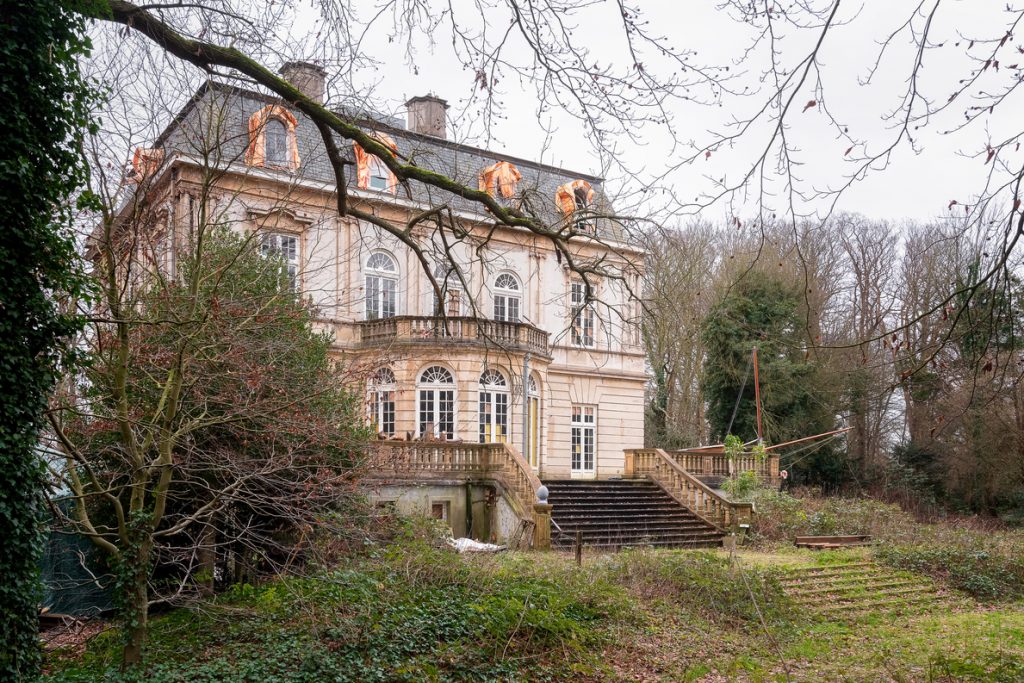 Enforcement of a zoning plan would suggest there is a plan. There isn’t.

The municipality of Wassenaar has decided to pursue our eviction from Huize Ivicke on the basis of the building’s zoning plan which designates its function as an office, not a residence.

Their reasoning for the decision appears to be that ‘Kantoor Ivicke’ must become ‘uninhabited’ once again in order to be ‘presentable.’ Strange, since we all seem to recall that Ivicke being uninhabited is what led to it becoming unpresentable in the first place.

The normalization of actual offices and other business premises as anti-squat housing – operating in a ‘legal grey zone’ – demonstrates that Ivicke’s designation as an office is incidental; a handy bureaucratic tool the municipality can choose to use or disregard, depending on their interests at any given time.

Their decision to now make use of this tool, while offered by the media as a new twist in the tale of Ivicke, has been a long time coming. Indeed, the way the municipality went about this latest move is a repeat of a strategy they employed late last year.

The Municipality Cautions Against Enforcing The Zoning Plan

At that time, we were aware that the owner had sought our eviction on the basis of the zoning plan since the very beginning of our occupation. In response to inquiries from the owner, the municipality said the following in early January 2019:

“The public order aspect also plays a role here. If you leave the property empty after the eviction and there is no realistic prospect of suitable reoccupation, there is a danger that the property will be squatted again due to vacancy. As is well known, evicting squats is often accompanied by serious disturbances of public order.”

But the municipality’s latest move suggests that it is now our continued occupation of Ivicke, absent of any concrete plan for the building’s use, that is the threat to public order.

The Municipality Says No

A few weeks after the municipality’s response, the owner lodged an official request for our eviction from Ivicke on the basis of the building’s zoning plan. The municipality rejected this in June that year, arguing that the owner should first make use of other available legal channels, such as starting a civil court procedure.

The owner’s representatives said they could not do this out of fear they would lose the case since, well, they do not intend to do anything with the building but leave it to rot. As such, the owner made clear his intention to lodge an appeal on July 29, which was received by the municipality on July 31, 2019.

This just so happened to be when we were hosting people participating in the No Borders Camp (NBC). 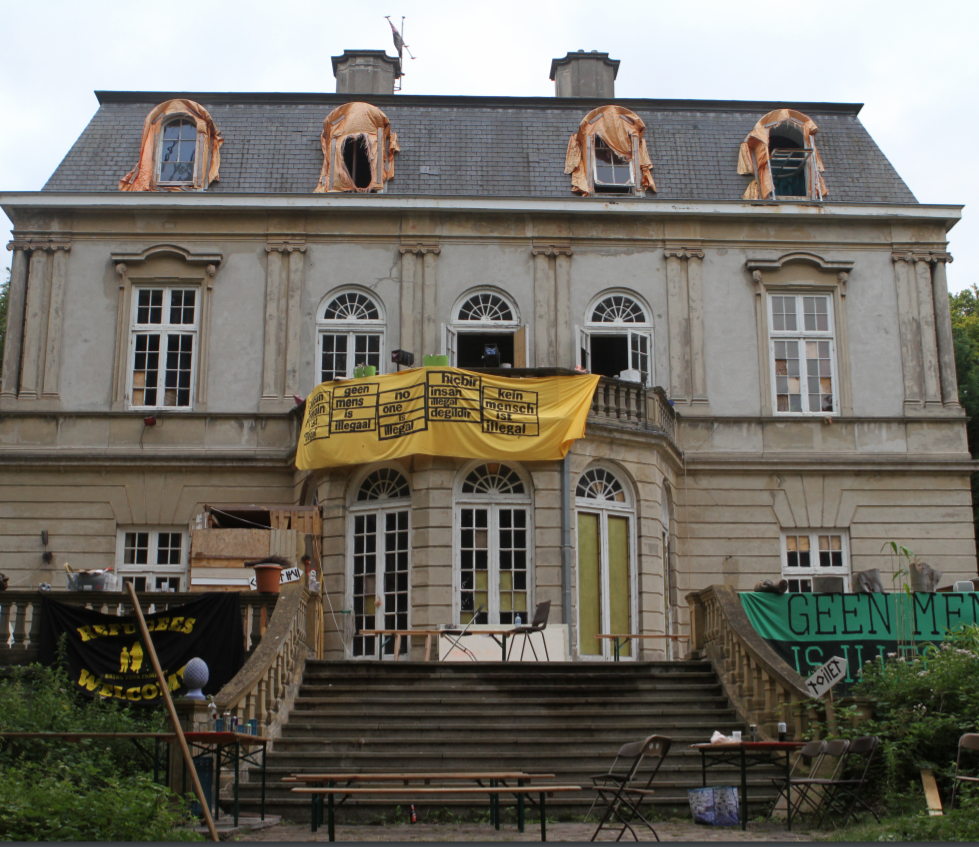 VVD Wassenaar seized on the opportunity, via the ever obliging media, to portray our decision to host people exercising their right to protest the EU’s murderous border regime as proof that we were a threat to public order and safety. This had no foundation in reality.

But none of this mattered to Laurens van Doeveren, VVD Wassenaar party chair. When VVD Wassenaar talk about a ‘threat to public order’, they mean a threat to the established order. Anyone who operates outside their law, outside their market, cannot be tolerated. Unless, like Ivicke’s owner, they are rich. Then it is perfectly reasonable to ignore and downplay ‘illegal’ activity, market distortion/manipulation, and continue with the pretence that one is dealing with a serious businessman ‘with whom we hope to have a constructive dialogue.’

During the NBC, Laurens van Doeveren decided to instigate his own one-man counter protest and then impersonated a journalist to access the terrain. VVD Wassenaar, alongside their governing sidekicks the CDA, finally had a pretext to push for an eviction. The camp showed that “we are not sweethearts,” or something…

The owner’s lawyer elaborated on the grounds behind their appeal several weeks after the NBC. It didn’t contain anything of note that wasn’t already in the original request to enforce the zoning plan. That is, except for the claim that the NBC demonstrated we are a grave threat to the building’s monumental characteristics. Anyone vaguely familiar with the owner’s real estate tactics will understand how laughable this faux concern is.

It was at this time that we first heard of the owner’s attempt to have the municipality evict us on the basis of Ivicke’s zoning plan. The owner’s lawyer mentioned it in court during their failed attempt to shut the event down. Shortly thereafter, we contacted the municipality to ask about the status of the owner’s appeal to enforce the zoning plan and whether, as an interested party, we could submit our position. We never received a response.

The Municipality Changes Its Mind

A few days later, after the municipality’s victory in court against the owner’s objection, we received a letter informing us that they had overturned their decision not to enforce the zoning plan. This was their first official contact with us on the matter. We had to leave within 5 months, no later than June 2020. We insisted on submitting our opinion on this decision as an interested party. The municipality eventually relented, and then we heard nothing more about it.

So now, if VVD Wassenaar and the council has its way, a new cycle of vacancy and neglect, after already spending hundreds of thousands of euros on Ivicke’s restoration, will begin. “Good news,” as far as Laurens van Doeveren is concerned. His public statements on the issue since the NBC are proof enough that our eviction from Ivicke has nothing to do with the best interests of the building, and everything to do with continuing the VVD-led moral panic against squatting as a legitimate and necessary response to the structural violence of the financial housing market.

The Municipality Is Full Of Shit

Before, we could indulge this pretence as long as the municipality largely left us alone, in the absence of any concrete plan for the building. But this zoning plan decision means the municipality has laid its cards on the table and made its priorities clear: for many in the council – certainly those with the most power – any concern for Ivicke is outweighed by hostility towards squatting.

It is a spit in the face to our efforts to repair and maintain the building, as well as those of monumental organizations. It demeans and undermines our cooperation with municipality bureaucrats, at their request, in the best interests of the building. Anyone with expertise on the matter of building conservation understands the importance of our intervention, even if they choose not to say so publicly or are not given the opportunity to do so. Yet the municipality ignores this and is now openly willing to risk any gains made for Ivicke over the last two years to create another situation of vacancy under the pretext of an arbitrary and malleable zoning plan.

While we are angry, we are not surprised. For decades, squatters have intervened to help save buildings and even entire neighbourhoods from needless, profit-driven destruction. This history is quietly erased, lost to most people. What we are witnessing now is the same process playing out in real time.

So, congratulations VVD Wassenaar, you merchants of bullshit, on your efforts to ensure a new 20+ year cycle of vacancy and neglect at Ivicke. On our part, we can assure you we’ll do everything in our power to prevent it.

However, while Laurens van Doeveren and VVD Wassenaar celebrate their commitment to vilifying squatters and enabling property speculants, figures from monumental conservation organizations are already concerned about this latest development. Discussions are ongoing as to how to protect the building from fire in our absence. If we’re no longer around, will Laurens van Doeveren volunteer as fire-watch? Given his desperate attempts to promote himself as a ‘man of action’, dedicated to the building’s well-being, we can’t think of a more suitable candidate.